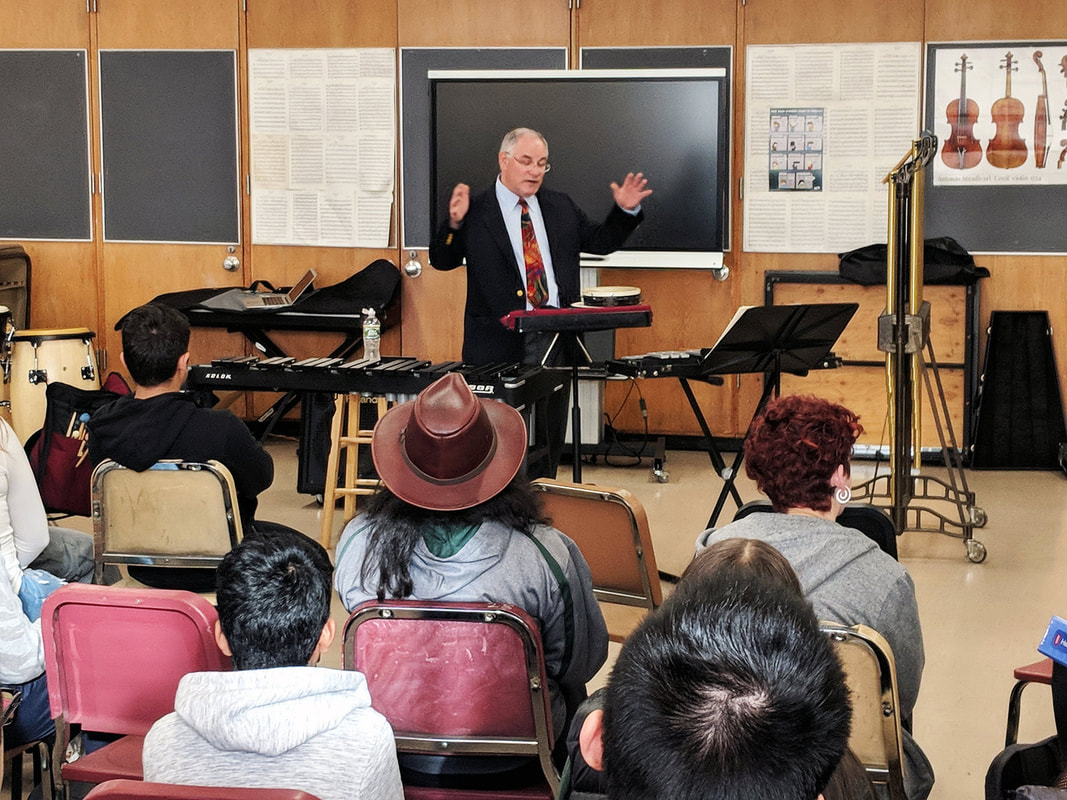 ​Neil Grover ascended from the classrooms of Bellmore’s John F. Kennedy High School in 1973 to performances around the nation today with the Boston Pops Orchestra, as one of the country’s premier percussionists.
“He’s one of the most critically acclaimed musicians ever to come through the halls of JFK,” said Director of Bands Walter Avellaneda, welcoming Grover back to share a bit of inspiration with students.
“The last time I was here was in 1974, I believe,” Grover, 63, told Avellaneda’s class on Dec. 3. “The school looks fantastic. It looks better than I remembered.”
Grover is a master of 40 percussion instruments, and in 1980 founded Grover Pro Percussion, specializing in the Grover Super-Overtone triangle. The triangle was the result of years of research and experimentation trying to recreate the “sonic sparkle” of the vintage one used by the Pops.
After 40 years with the orchestra, Grover remains one of four percussionists. “I do a lot of mallet playing,” he said, “but we all play everything.”
Almost as important as Grover’s professional accomplishments, as far as Avellaneda’s students were concerned, was the alumnus’s friendship with film composer John Williams.
Williams created eight of the 10 most popular film scores of all time, Grover said. He played with Williams on the score of “Indiana Jones and the Temple of Doom” in 1984, and hit the road with Williams in 2009 to play “Star Wars in Concert.”
On one tour with Williams, Grover recalled, the orchestra was readying to play “Liberty Fanfare,” a Williams piece commissioned to celebrate the Statue of Liberty centennial. The piece calls for a D from an enormous chime — hung high, and accessible only via ladder — but the chime hanging was a D-flat.
“We forgot the D in Boston,” Grover said with a laugh. “I had to tell John Williams that we didn’t have it.”
After working up his courage, Grover said, he asked Williams if he could play the chime an octave higher.
“I’d prefer that you didn’t,” was Williams’s reply.
With some instrument-building experience already under his belt, Grover “got a hacksaw and started cutting,” he said.
Just minutes before the concert began, Williams walked onstage to find Grover on a ladder, in his tuxedo, cutting away at the D-flat chime enough to produce a D.
“I got it really close to a D,” he said. “There was junk all over my tuxedo, and John just says, ‘Neil, that was amazing.’”
Weeks later, Grover said, he was on vacation while a colleague was preparing for a concert, and needed a D-flat from the same chime — but he kept getting a D.
“I told him to get a C, and cut it down,” Grover said.
Grover engaged the students with a lively rendition of “Merry Christmas, Merry Christmas” — the end-credits music from “Home Alone” — on glockenspiel and chimes, and enlisted the room to shout the “Hey!” that punctuates the song.
Grover told students that when he was at Kennedy, he would practice four to six hours a day, and he still practices at least an hour a day.
Even though, “sometimes I don’t even want to look at the instruments,” Grover said, “unless I can play it 10 times by myself perfectly, I know the piece isn’t ready for the concert hall.”
Avellaneda said that Grover’s visit came together at the last minute, but his students were still talking about the class over a week later.
“There’s what I call a ‘Grover moment’ every single day,” he said. “It was one of the best things I’ve done in 12 years of that class. It was powerful for them, and gave them such a good, positive experience.”
He added that he swears the band has even sounded better since Grover’s appearance. “Their musicianship improved, because, I think, they were inspired to not hold back so much,” he said. “I was so impressed with how he just got to the kids’ level. Sometimes you bring someone in here and he talks over their heads.”
Grover told Avellaneda later that Kennedy’s band director from 1971 to 1975, Barry Bieber, was watching the class live via YouTube stream.
“He said he was glad the program continues to flourish,” Avellaneda said.
To Watch the Masterclass in its entirety...