Message from Director of Bands, Mr. Avellaneda:
Welcome to the website of the John F. Kennedy HS Band program. Whether you are a student, parent, alumni, or community member it is my hope that you will find this website helpful in keeping you up-to-date on the latest happenings in our band program. Please feel free to explore the entire site and if you are an alumni I invite you to visit our history page!
Thank you for your support!
Mr. A 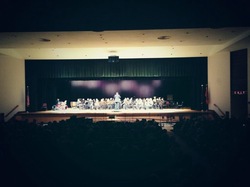 Walter Avellaneda is a graduate from the Benjamin T. Rome School of Music at The Catholic University of America in Washington DC, where he majored in Instrumental Music Education. He received his Master's Degree in Music Education from the Aaron Copland School of Music at Queens College. He studied bass trombone with Dr. Gerald Felker and Matthew Guilford of the National Symphony Orchestra. As a composer he studied composition with Stephen Melillo. His conducting teachers included Dr. Michael Smith from CUA and Dr. Kate Tamarkin, of the Charlottesville Symphony Orchestra.
Mr. Avellaneda has traveled and performed extensively throughout the world. He has performed in Halifax, Nova Scotia; St. John's, England, Norway, Sweden & Denmark. He can be found performing on bass trombone in the Emmy-Award winning documentary: Defiant Requiem. (See trailer) This documentary  was filmed and recorded in Prague, Czech Republic and can be viewed on Netflix. Mr. Avellaneda has also traveled to Japan to record the Grammy Nominated STORMWORKS: Chapter 5/8 CD "Writings on the Wall" with the Central Band of the Japan Air Self Defense Force. He was also a production assistant on the STORMWORKS Chapter 1Prime CD, A Wish to the World.  He has also had his own compositions rendered in Germany, Italy and by bands in the United States, including the All-Iowa 8th Grade Honor Band.
Mr. Avellaneda currently serves as Director of Bands at John F. Kennedy High School in Bellmore, New York. As director, he oversaw the implementation of the schools first wind ensemble and overall redesign of the band program. He conducts the schools Concert Band, Symphonic Band, Wind Ensemble, Pep Band, Pit Orchestra, Jazz Ensemble, and Parade Band. While at Kennedy, Mr. Avellaneda has led students in performances at The United States Naval Memorial, The FDR Memorial, Celebration of the Arts, Founder's Day Dinner, Hofstra University, Quincy Market, and Walt Disney World. The bands have also toured to Washington DC, Baltimore, MD, Orlando, FL and Boston, MA. Mr. Avellaneda was honored with the Cougar Pride Teacher Recognition Program in 2011& 2015(x2), 2017 and is a 2015 Bellmore-Merrick PTA Founder's Day Award recipient. He has also served as chairperson to the division 4 NMEA All-County Jazz Ensemble. Mr. Avellaneda was also named a  2016 Quarter-Finalist for the Grammy Music Educator Award. Out of 4,000 applicants, Mr. Avellaneda made it to the top 213. Mr. Avellaneda is also a certified NYSSMA Brass Adjudicator. He is also member of the Remind Connected Educator Program. Previously, Mr. Avellaneda student taught at DeMatha Catholic High School under the tutelage of  Mr. John H. Mitchell.
Mr. Avellaneda is a graduate of Carle Place High School and is proud to be a past member of the New York All-State Symphony Orchestra & Jazz Ensemble,  The NAfME All-Eastern Symphony Orchestra, The Nassau Suffolk Performing Arts Wind Symphony, and the Long Island Youth Orchestra. Mr. Avellaneda is an active private brass methods instructor and performer. He is a member of ASCAP, NAfME, NYSSMA, and NMEA. He resides in Suffolk County with his bride, "Mrs. A", who is also a music educator and flutist and their son, Gerard, who currently makes music out of every toy he touches!